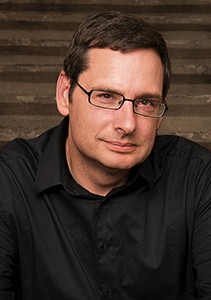 DARYL GREGORY: RUNNING FROM BEARS
Daryl Gregory’s old acting teacher once told him that you can’t run from a bear—you can only run to what’s going to save you: the tree, the shotgun, or that spot just past your slower brother Louie. In this workshop you’ll learn how to create compelling stories by focusing on the essence of drama: characters who want something specific, and don’t get it until the end (if then). Through exercises and discussion you’ll learn practical techniques for creating dynamic plots, believable characters, and scenes that matter.

Daryl Gregory is an award-winning writer of genre-mixing novels, stories, and comics, including SF, fantasy, horror, and YA. First novel Pandemonium (2008) was a World Fantasy, Mythopoeic, and Shirley Jackson Award finalist, and won the Crawford award for best first fantasy. Second novel The Devil’s Alphabet (2009) was a Philip K. Dick Award finalist, and zombie novel Raising Stony Mayhall appeared in 2011. Neuro-SF novel Afterparty was an NPR and Kirkus Best Fiction book of 2014, and a finalist for the Lambda Literary awards. His most recent works are the young adult novel Harrison Squared (to be followed by books 2 and 3 in the next two years) and the novella We Are All Completely Fine, which won the World Fantasy Award and the Shirley Jackson Award, and was a finalist for the Nebula, Sturgeon, and Locus Awards.

Upcoming novel Spoonbenders will be published by Knopf, and has been picked up by Paramount for Anonymous Content.

Several of the novels are being adapted for television. Many of his short stories are collected in Unpossible and Other Stories (a Publishers Weekly best book of 2011). His comics work includes Legenderry: Green Hornet, the Planet of the Apes, and Dracula: The Company of Monsters series (co-written with Kurt Busiek).

Workshop location and other details will be emailed after registration. Workshop is in San Leandro, CA near BART.  Additional questions? Please e-mail Locus.